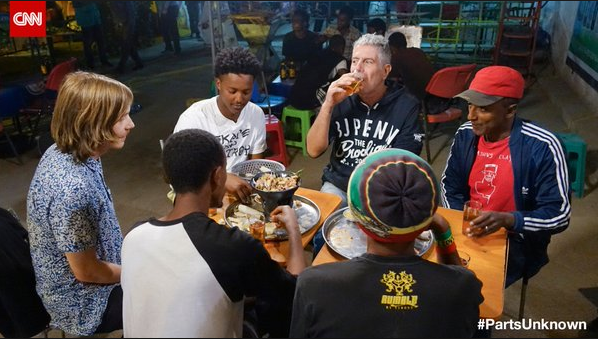 Catch Bourdain sipping on Turbo in the awesome episode of CNN’s Parts Unknown and wondering exactly what that strange combination of booze was?

While Bourdain correctly sites that the #1 rule of drinking is never to mix, he also abides by the most important travel rule ever: Do As the Locals Do.

So sip turbo he did.

Turbo is the drink most commonly served at Ethiopia’s many butcher houses. It’s a mix of beer, wine, and soda that varies from restaurant to restaurant.

It’s Ethiopia’s take on a summer shandy. It’s effervescent and sweet, and slightly reminiscent of something a college freshman might drink, but it’s perfect alongside roasted (or raw) meat.

At our favorite butcher house (those who’ve been on our food tour know it well), turbo is made of Awash white wine, Sprite and Amber beer. It’s ceremoniously mixed together at the table into a pitcher and served into wine glasses. The mix varies from place to place: it could be 7Up instead of Sprite, or St. George or Bedele instead of Amber. The more local places or maybe better put, the ones catering to those looking to get drunk even add arake, a locally made spirit.