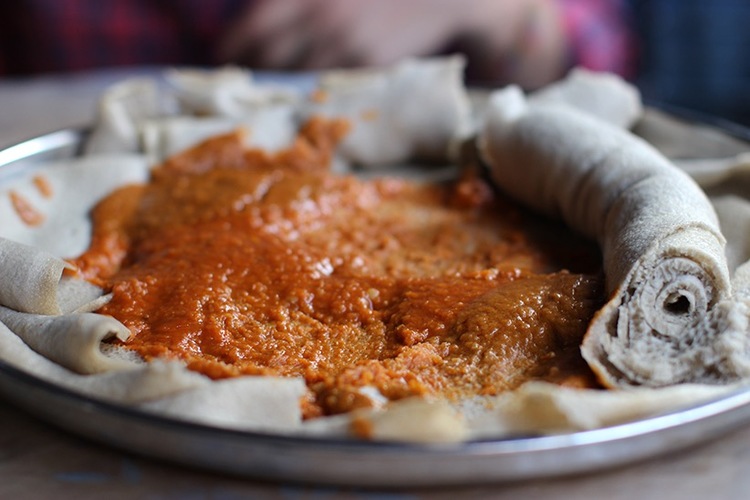 What is it?  Injera is strange the first time you see it, touch it and smell it. It’s squishy, sour-smelling and looks a bit like the surface of the moon. But it’s delicious and accompanies everything perfectly. It’s injera and it’s about to be your new favorite utensil.

How’s it made?  Injera is made from teff – one of the smallest grains in the world and the staple cereal of Ethiopia. One cup of cooked teff has more calcium than the equivalent amount of milk, and twice as much iron as wheat and barley. Teff has more protein than any other grain. It is also high in phosphorus, magnesium, aluminum, copper, zinc, boron, barium and thiamin. To top it all off, it’s celiac-approved! Teff is ground into a powder, mixed with water and leaven and left at room temperature for two to five days to ferment and rise (it’s usually cooked on the fourth day). The fermentation is what gives the injera its tangy taste. Next, the mixture is poured over a hot, flat iron pan called a mitad, which is where the bubbly surface comes from.

In Addis, almost all injera is made from teff, while in rural areas you’ll find injera made from barley or sorghum. While interesting to try, in our (and most Ethiopians’) opinion the good stuff is made from teff! Teff comes in white and dark varieties.

How to eat it? At first it’s daunting – having to somehow, with one hand, rip a small piece of injera from a larger one, carefully wrap it around the food you want to eat and gracefully deliver it to your mouth without dropping it all over your lap. To make matters worse, Ethiopians all around you make it look so easy: their faces aren’t covered in bits of food and their pants are clean. But don’t get discouraged—they’ve been practicing for years! Here’s a quick tutorial to give you a head start in the injera eating game.

Ethiopians eat only with their right hand and reserve the other hand for drinking. As they casually pluck food from the table, they keep their fingers from touching their lips as they precisely place the food inside their mouths. And, as tempting as it may be, they never lick their fingers. When sharing a communal plate, you eat only from the spot in front of you (except in the case of beyaynetu) – but you’ll notice that even before you run out, your Ethiopian neighbors will replenish your section.

Almost all dishes are served over a bed of injera. The best part? As long as you have leftover injera some restaurants keep the food coming.  Same thing goes if you’ve finished all the injera before clearing the rest of your plate.