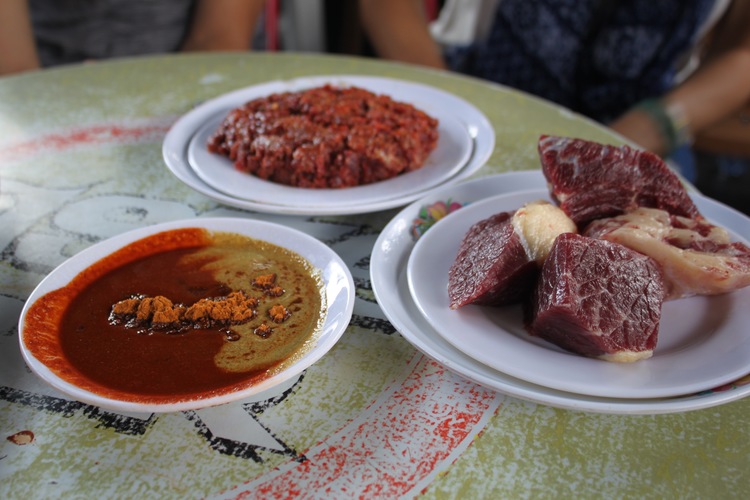 If you’ve ever been to Ethiopia you know that Ethiopians love meat. They eat it for every meal of they day if they can afford it.  And it is always served with a range of condiments.

Every restaurant makes their own version of the three most common: Awaze, Mitmita and Senafich. They’re different everywhere you go. It’s part of what makes eating Ethiopian food so much fun. Awaze is made of berbere powder and a liquid (either water, tej (local honey wine), red wine, or beer).

Butcher houses keep their condiments in repurposed water bottles. The butchers flip them over and squeeze the sauces through a hole they’ve poked in the lid. Our favorite Awaze is from Yilma in Nazareth where the sweetness of the honey wine pairs perfectly with the spice and salt of their Berbere powder.

Mitmita, like Awaze is used mainly as a dip for cooked and raw bits of meat. Unlike Awaze, it is not mixed with a liquid: Mitmita is eaten as a powder.

Mitmita is made of African Birds-eye chili (the same chili used in Portuguese piri piri). The peppers are dried and mixed with garlic, cardamom, white cumin, bishops weed and salt and ground together. Some variations include koseret (similar to oregano), rosemary and black cumin.

Mitmita is one of our favorite condiments. It’s spicy, garlicy and salty, so how could it not be? It is the most versatile of Ethiopia’s spices. We sprinkle it over popcorn, mix it with scrambled eggs, use it as a rub for roasted veggies and a spice for soup. Senafich is a spicy mustard sauce that has a bit more liquid to it than western mustard and is used as a dip rather than a spread. Senafich is made from ground mustard seeds, vinegar, garlic, oil and salt – although, like most everything, it is prepared differently at every restaurant. Senafich has a kick to it similar to wasabi