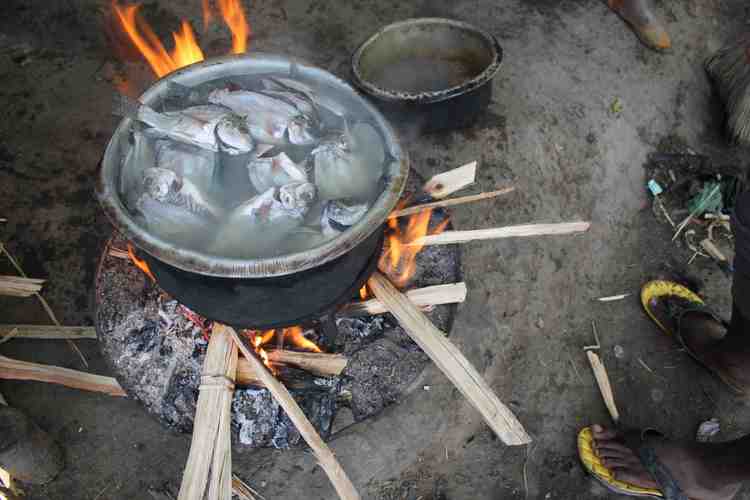 Fish has always been consumed in the lake regions of Ethiopia but has now become a bigger part of the cuisine as more liberal Orthodox Christians eat fish during the fasting (vegan) days. With just three days left of the Easter fast, fish restaurants are nearing the end of their two-month busy season. At our favorite fish restaurant in town, this meant opening up an additional two floors to sit all the incoming patrons!
Fish eaten in the larger cities of Ethiopia, away from the lakes, is mainly tilapia and small amounts of Nile perch. But rockfish, carp and catfish are eaten in the fishing towns. There are several variations of fish commonly eaten in Ethiopia.

Koroso is deep fried fish cut in a checkerboard style so that in can be eaten without cutlery. It is served with lime and a spicy cochcocha dipping sauce. This is the most common preparation of fish and the favorite of many of our guests on our food tour. Asa lebleb is lightly cooked fish in a flavorful sauce. The spices used in the sauce vary throughout Ethiopia. Asa lebleb is usually only found in fishing towns where the fish is very fresh. Asa Goulash is deep fried fish served in a spicy sauce with tomato and onions and eaten with injera. It has no resemblance to goulash whatsoever but this is the name used throughout the country.

Tere Asa is raw fish served only at a fish market, or early in the day (when the fresh fish comes in) in a nearby restaurant. It is usually served with lime and a spicy dipping sauce. The most common fish to eat raw is carp. Asa shorba is fish soup. This is perhaps the dish that varies the most throughout Ethiopia. Fish markets in Ethiopia are a lively and somewhat chaotic affair. Pterodactyl-like birds swoop in waiting for scraps as fishermen clean their catch. Well-to-do visitors order raw fish directly from the boats. Shacks often line the perimeter where they cook up the day’s fresh catch. Awassa has a charming lake-front promenade where dozens of restaurants (some built over the water) serve fish caught fresh from the lake all day.

Want to visit the fish markets of Ethiopia? Get in touch with us here.