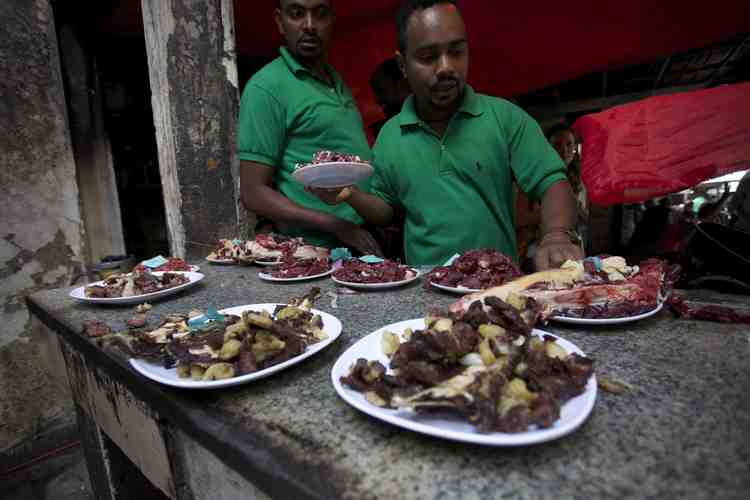 As Ethiopia’s fasting season (when Orthodox Christians eat vegan) begins, we take a look back at our favorite meat dishes and count down the days until they are readily available again. Sigh…

TERE SIGA is the most popular raw meat dish. Tere siga translates literally to raw meat and is served in fist-size chunks. Eating tere siga is one of the favorite weekend activities for Ethiopia’s middle and upper classes. At Addis’ most popular meat house (which we visit on our food tours), you can barely find a table on the weekends especially mid-afternoon on Saturdays. Butcher houses usually have a semi-outdoor area, strewn with plastic tables and chairs where people sit to eat and drink. You order your meat from the butchers and order drinks from the servers. Establishing a strong relationship with those butchers, i.e., tipping them regularly, ensures higher quality cuts. Butcher houses usually only serve two dishes: raw or cooked meat with the quality of the cut based upon the favor the butcher shows you.

Eating tere siga is one of the only times you’ll see Ethiopians using utensils. They’ll cut their fist-size pieces of meat (fat included – and sometimes just fat!) artfully as they hold the piece between their fingers.

Going out to eat raw meat is a relaxing and social activity. Ethiopians will eat raw meat to their heart’s content and then eventually send the uneaten pieces back to the kitchen to be cut up and cooked into tibs (see below).

Meat, whether raw or cooked, is served with three condiments: awaze,senafich and mitmita.

KITFO: We just can’t get enough of this stuff. See our previous blog post here.

LEWUS: We only recently learned about this dish when the butcher at our favorite spot forced us to try it when we caught him sneaking bites behind the butcher counter. Lewus is meat cut in a similar fashion to kitfo, but spiced with mitmita instead of butter. Unlike kitfo, it’s a fattier cut of meat from the leg.

TIBS are the go-to cooked meat dish. Whether made from beef (most common in Addis), goat or lamb they can be succulent, tender and juicy when done right. Rather than you doing the work of cutting up a steak – Ethiopian’s generally don’t use utensils – tibs is a dish where all of the work is done for you. Small pieces of meat are sautéed in kibbeh or oil with onions, garlic, hot pepper and sometimes a bit of rosemary. The meal is served, obviously, with injera. One can get tibs in a variety of other ways: awaze tibs (a berbere and tomato sauce),sheckla tibs (served in a clay pot sizzling over charcoals), alicha tibs (no spice) or zilzil tibs (cut in a zigzag about 8 inches long and grilled).

SIGA WOT – Kai Wot (Beef, Lamb or Goat) or Doro Wot (Chicken): Wot is Ethiopia’s version of curry. It’s a stew-like dish served over and eaten with, you guessed it, injera. The main ingredients are onions, garlic and berbere. Wots are made from a base of onion – a ridiculous amount of onion. We’re talking a kilo of onions per wot (which serves three to four people), all simmered for two hours until they are nice and softened. Kai wot is one of the most widely eaten meat dishes in Ethiopia. Kai means red in Amharic and refers to the berbere, which gives the dish its dark red color. Kai wot can be made with beef, lamb or goat. Doro wat (chicken stew) is really only eaten on very special occasions given the amount of time it takes to prepare and the high cost of chicken. It is cooked with more onions, berbere and kibbeh than kai wot.

So we’ll wait, perhaps not so patiently, until Easter Sunday when doro wat will be made throughout the country. Until then, we’ll take advantage of the many restaurants serving a spruced up beyaynetu (vegan fasting platter) and maybe cook some meat at home.