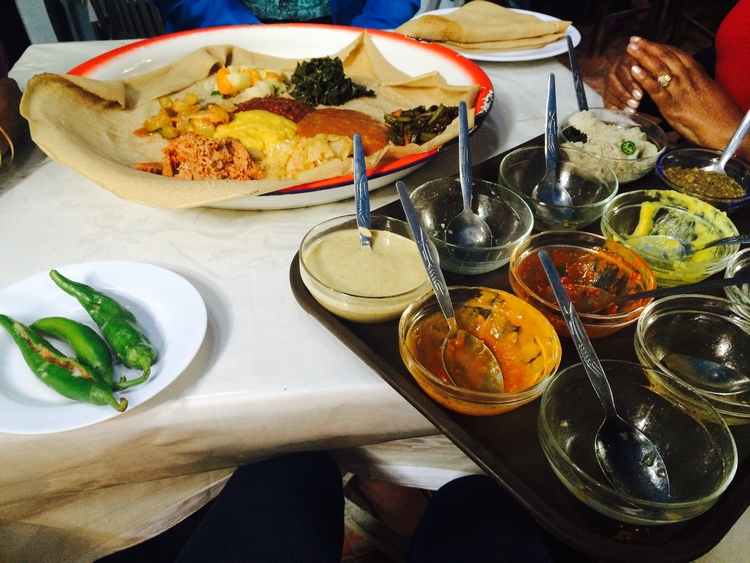 Yesterday we were kidnapped and held hostage by a group of family friends in their late sixties. This lovely group of ladies wanted to show us one of the most popular fasting restaurants of their heyday: Tsige Bayou.

Ethiopian Orthodox Christians fast (eat vegan) on Wednesdays and Fridays and during lent, the 55-day fasting season before Easter. The most prevalent fasting dish is beyaynetu: lots of different legume and vegetable dishes prepared with different spices atop injera.

Beyaynetu is one of our favorite dishes and we wish it was served daily. It’s by far the most varied dish in Ethiopian cuisine and is the dish that changes the most from restaurant to restaurant so it’s the most fun to sample.

We immediately loved this restaurant because to get there, you have to walk through the bathroom supply section of the Kazanchis neighborhood where stores sell everything from tiles, to light fixtures, to toilets and so much more. The restaurant is located off a cobblestone street in the middle of this neighborhood. (Exact directions are at the end of this blog).

We held the arms of the old ladies as they hobbled down the cobblestone streets in their fanciest high heels dodging men carrying stacks of tiles and PVC pipes.

Even though they had been here countless times, they had to keep asking shopkeepers if we were on the right track. The restaurant is in a converted house and most of the seating is outside. We settled into a table in an area covered by tarp and let the ladies do the ordering.

The beyaynetu was served in a fashion we’d never seen before. Normally, the injera comes out of the kitchen with a scoop of everything they have that day on top. At Tsige Bayou, however, the injera was served with only misir (lentil stew), shiro (chickpea powder stew) and aliche (non-spicy split pea stew) – the staples of every beyaynetu. This was followed by a tray of small bowls filled with other dishes. The waiter dutifully spooned each on to the injera and then disappeared back into the kitchen.

The injera was warm straight from the mitad – the specialized stove where injera is cooked. It was sticky and fresh. It wasn’t fermented to the extent that most are so it was absent of the tangy taste that we’ve come to expect from injera. This was a good beyaynetu, but we weren’t blown away by any of the dishes. We loved the cold lentils with senafich (mustard powder) because they tasted almost like they were dressed with horseradish.

Our conclusion? While it may have been a great spot for beyaynetu back in the day, there was nothing truly notable about this spot, except for the unique location. It’s a good place to grab a beyaynetu, but nothing to cross town for.

To get here, take the small road across from a tall silver building with red stripes at Genet Ceramics. Then turn left before Daniel Lemma General Trading and make another left after Efron PVC.