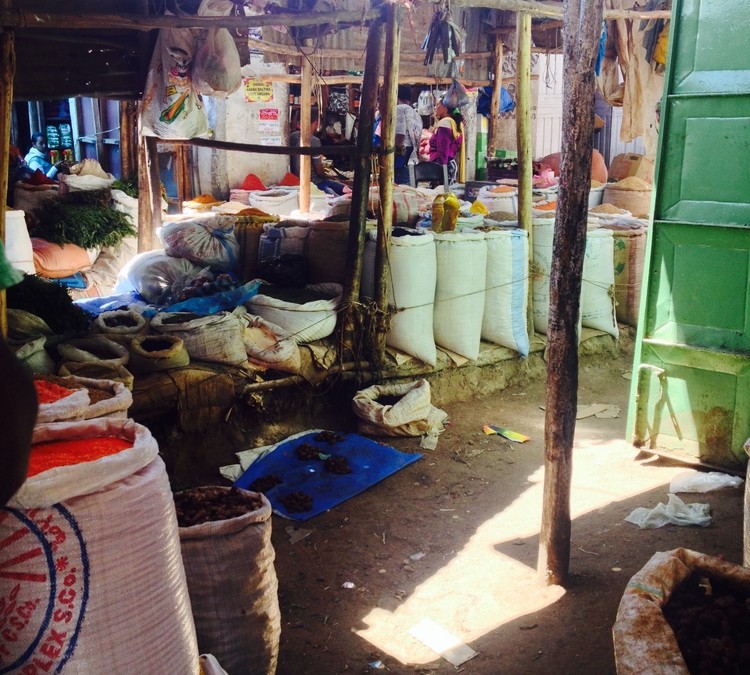 Breakfast was included in the price of our room and we were delighted when it arrived that morning. We were served flat bread with local honey and spiced tea on the floor of our room. We added some sliced banana to the bread and while heavy and sweet from the honey, it was also crispy and flaky.

After a morning of wandering the streets with Hamde, we visited another of his favorite spots for lunch. That day we tasted abish, a bowl of camel meat and broth, boiled potatoes, sorghum injera and tomatoes. Unlike most stews in Ethiopia that are spiced heavily with berbere, a dark rich pepper, abish is spiced with ondo, a mild mixture of several lighter spices such as cumin and black pepper. Inconsistent with the food we’re used to in Addis, this brothy dish is chopped with a spoon once it reaches your table and instead of using injera to pick up the food, you mush the chopped up injera, camel meat and potatoes into a ball (bigger than a golf ball!) and shove it into your mouth. The dish is usually served with fresh lettuce and tomato on top, although we skipped those just in case they were contaminated with water.

The ondo was great and versatile so we headed off to the local market to pick some up. And in true Ethiopian fashion, the relatively mild ondo is sometimes mixed with mitmita to give it a kick. Afterwards we rode a bajaj (covered motorcycle) to the Harar Beer Factory on a hill on the outer reaches of town. We couldn’t help but think it is a bit strange to have such a large beer factory in a Muslim city (and Hamde, a Muslim, wouldn’t come in with us). He also doesn’t drink the non-alcoholic beer they make here because it is made in the same factory as alcoholic beer. We weren’t there to drink non-alcoholic beer though, so we sat outside at a wobbly plastic table and sucked down some Harar beers on draft. We each had a Harar, a pleasant enough lager but nothing special, and a Hakim stout. Although called a stout, the Hakim stout is perhaps closer to an amber with flavors of molasses and dark fruits.

If you want to tour the factory, they insist you wear closed-toed shoes (we weren’t sure why though).

That evening for dinner we returned to the lunch spot from our first day for more camel goulash. We washed it down with warm camel milk (mixed with lots of sugar, of course) and a very simple bread to dip in it. We stayed at Anisa’s Guesthouse, which we highly recommend. The owner is an incredibly warm and friendly woman and the guesthouse is just a couple of rooms in her family compound where her mother and husband also live. They are so gracious and welcoming. The price is something like $30 a night and includes breakfast. Her number is +251 (0) 915 33 00 11.

When we visited, her neighbor, Hamde, was our guide. He was exceptional. He opened up an uncovered world in Harar for us. His number is +251 (0) 910 85 04 23.   He can help make reservations at Anisa’s as his English is better than hers.