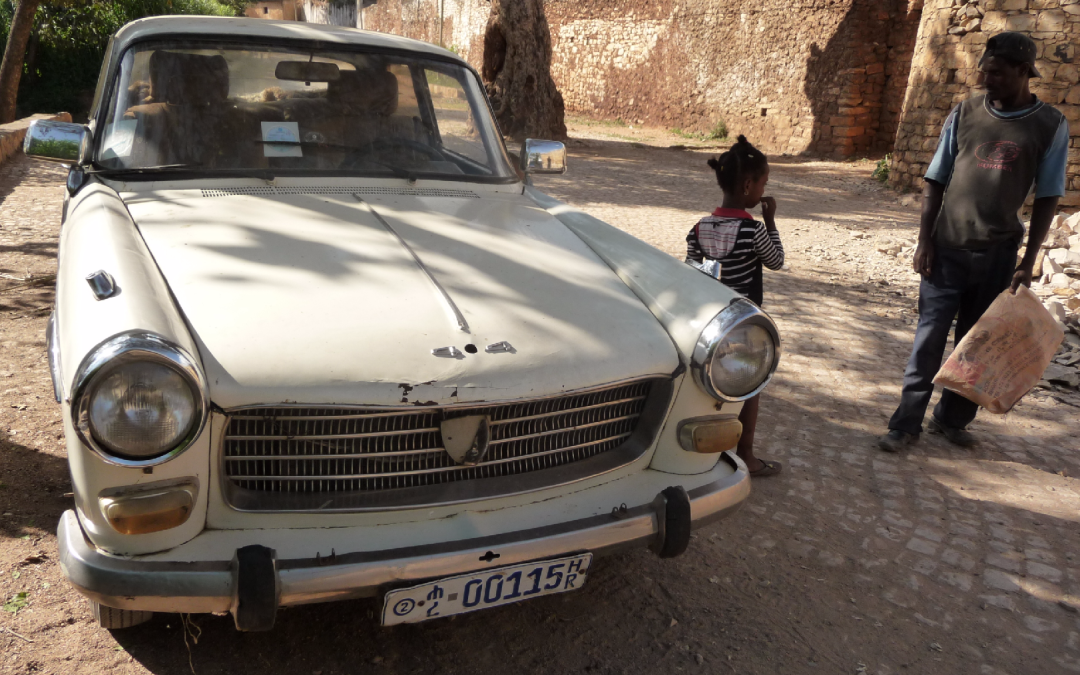 We traveled to the ancient walled city of Harar recently, and of course, tasting new and exotic foods was our main focus. We had heard that camel was the specialty dish to try while there – it’s not easy to come across in Addis except at some Somali restaurants – and we were chomping at the bit to get our hands on some camel.

So of course, that was our first order of business. After quickly dropping our bags at our guesthouse, we met up with our local guide, Hamde, a young 20-something kid who grew up in Harar and knew the city like the back of his hand (which is impressive because it is all teeny, winding alleyways). We told him we were hungry for camel and he took us to a favorite lunch spot of his. We ordered the only dish they had and waited impatiently. A minute later (yes, just one minute!) we were served a big plate of room temperature rice with two toppings: a saucy camel goulash and ground camel meat. The rice, although a bit oily, was no trouble as both the goulash and ground meat was fantastic. Our favorite was the goulash, rich and complex and unlike anything else we’d tasted in Ethiopia. The camel meat was a subtle cross between beef and lamb, not gamey or overpowering as some had described it.

That afternoon we stumbled into a coffee-roasting house. We smelled it on the way back to our guesthouse after lunch and were hypnotized by the scent. We followed our noses to the Harar Coffee Company, a small crowded factory with old, noisy machines. The coffee from here was a spectacular dark roast and packed full of flavor. You can buy whole bean and ground coffee for about 150 ETB per kilo ($3.75 per pound). That night, we visited the Hyena Man, an obligatory tourist activity when visiting Harar. This man and his father before him have been feeding wild hyenas nightly. The hyenas of Harar are different from those of Addis, however. The city walls of Harar have small doggy-door-sized holes that are meant for hyenas. People leave their trash outside at night and the hyenas come to ‘pick it up’. It’s quite the symbiotic relationship. Harar locals aren’t scared of hyenas that wander the streets at night and joke that they’re afraid of the stray dogs. The highlight of the night however, was eating fetira by candlelight afterwards. The power was out in all of Harar (an ordinary occurrence) which made for some spectacular star gazing, but that is beside the point. Hamde led us by cell phone light through the back alleyways and eventually to a main road where we stepped into a bustling local restaurant.

A 55-gallon drum was set up near the front door with a 2-foot diameter sort of flat wok set on top. Underneath, eucalyptus was burning to heat it. On a table next to the drum were the chef’s ingredients: eggs, chopped tomatoes, onion, karia (similar to a jalapeño) and palm-sized balls of dough made of wheat, water and oil.

First, the chef pulled at the dough until it was almost paper-thin and threw it over the wok-like cooking surface on top of some hot oil. Meanwhile, he mixed eggs, tomatoes, onion and karia in a bowl and then poured it over the dough. He folded in the edges of the rectangular dough to make a nice square shape. He made sure it was cooked through and crispy on both sides and then cut it into neat little squares for us.

Still hungry, we opted to try it chopped in small pieces, referred to as scrambled or ‘firfir’ in Amharic and served with mitmita on the side. Mitmita is one of our favorite Ethiopian spices: it is a flavorful, salty and spicy powder. We preferred this preparation of the fetira as it was less dense. For dessert we visited a camel yogurt house. A portion of yogurt came in a metal cup with about half a cup of sugar in it, making each bite crunchy. The yogurt was faintly cheesy but so fresh and a great end to our day, helping cut the spice of our dinner and settle our stomachs.

We sauntered back to the guesthouse happy and full and ready to sleep in preparation for another day of eating.