Nice to Meat You, Nazret. 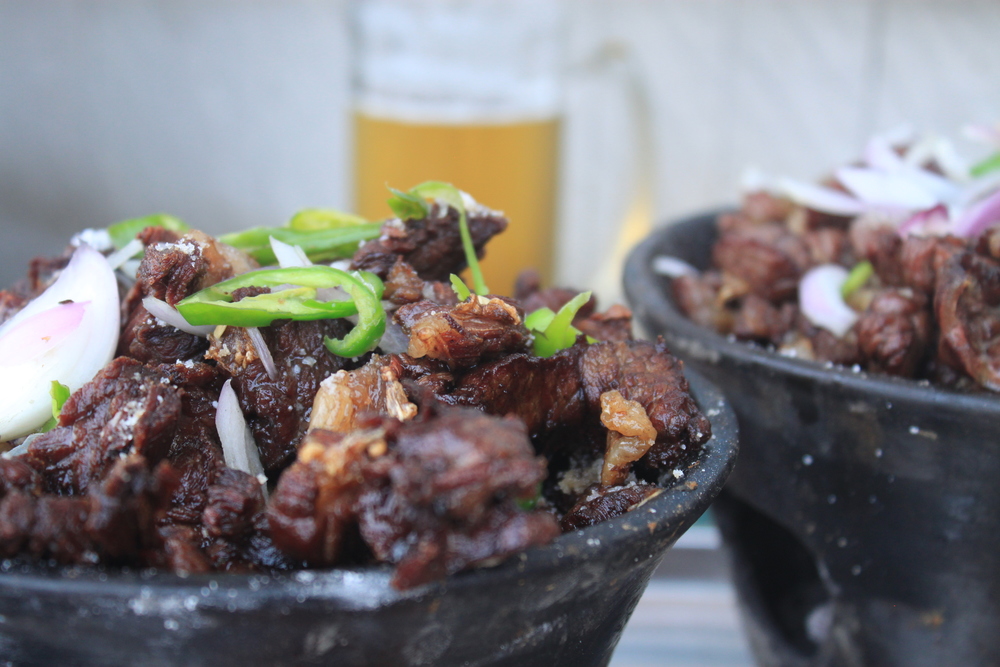 One rumor is that the cows are fed molasses. Another is that the fields around Nazret (known as Adama in the local language of Afan Oromo) are better for grazing. Regardless, people drive out to Nazret for the day just for lunch. Skeptical of course, we happily accepted the task of sniffing out the truth. So, we packed up the car and drove two hours southeast.

Upon telling friends and colleagues we were headed to Nazret for the weekend, we were inundated with restaurant recommendations. Yilma seemed to be the most popular so that’s where we headed first.

Yilma is your classic set up with a butcher out front – the only difference is the restaurant extends to the other side of the street. Unable to find on a seat on the left-hand side we crossed and found a seat on a busy balcony where we watched waiters run back and forth across the street, dodging traffic, with plates of raw meat over their heads. Of course most Ethiopians come here for raw meat, but after a recent bout of illness, we’ve decided to stick with the cooked stuff.  Now, I’m being honest when I tell you that the tibs at Yilma are some of the best meat we’ve ever eaten. They pan fry the beef and toss it over injera with the regulars: senafich and mitmita.  These succulent silver dollar-sized pieces melt in your mouth like butter. In a country where meat is frequently overcooked, we were delighted to get tibs cooked so perfectly medium rare. We ate silently and quickly, stuffing as much into our mouths as possible so that we wouldn’t get any less than the other – a tough part about communal eating. With regular tibs under our belt, we simply had to try shekla tibs in this meat heaven.  We were directed to Kidaane Mihiret. Like most meat joints, you order your beef up front at the butcher shop and take a seat. Several minutes later, that same raw piece that was hanging off a hook is now sizzling in a clay pot and headed your way. To our disappointment, the meat was not as rare as Yilma but still a far cry from shekla tibs in Addis.

We were skeptical that the meat could really be that much better and warrant such a journey – but we were beyond impressed. Satisfied and in a meat-daze, we headed back to Addis.

Kidaane Mihiret is located on the main road coming into Nazret across from the German hotel. It’s a two story indoor and outdoor restaurant on the corner.

Yilma is a bit more out of the way. To get there, it is best to hop in any bajaj (covered motorcycle) or taxi.